Next generation in ocean research - Bringing the ocean to the world

OceanX, the ocean exploration initiative founded by Ray Dalio and son Mark, has pointed out that, while humans have livestreamed broadcasts from the moon and beamed back images from Mars, over 80% of our terrestrial oceans are unmapped and unexplored. To that end, OceanX is on a mission – to explore the ocean and bring it back to the world.

Lighting up the darkness

The initiative combines science, technology and media in order to build a global community engaged with understanding, enjoying and – crucially – protecting our oceans.

OceanX’s numerous notable achievements include discovering a new species of shark, capturing the first ever footage of the giant squid, exploring the deep ocean around Antarctic and sending a submarine 1,000 metres down to reveal sights previously unseen by humanity. OceanX’s performance of the world’s first study of biofluorescent marine life led to the discovery of no less than 180 new biofluorescent species.

A flagship for a new generation of exploration

Amongst the tools in OceanX’s kit is R/V OceanXplorer. This vessel builds on the legacy of OceanX’s first vessel – M/V Alucia – and takes things to the next level. OceanXplorer is a ship built to inspire the next generation of ocean explorers. The vessel, previously named Alucia2, has recently completed her extensive rebuild at Damen Shiprepair Rotterdam (DSR). Following this, she is the most advanced exploration, research and media vessel ever built. 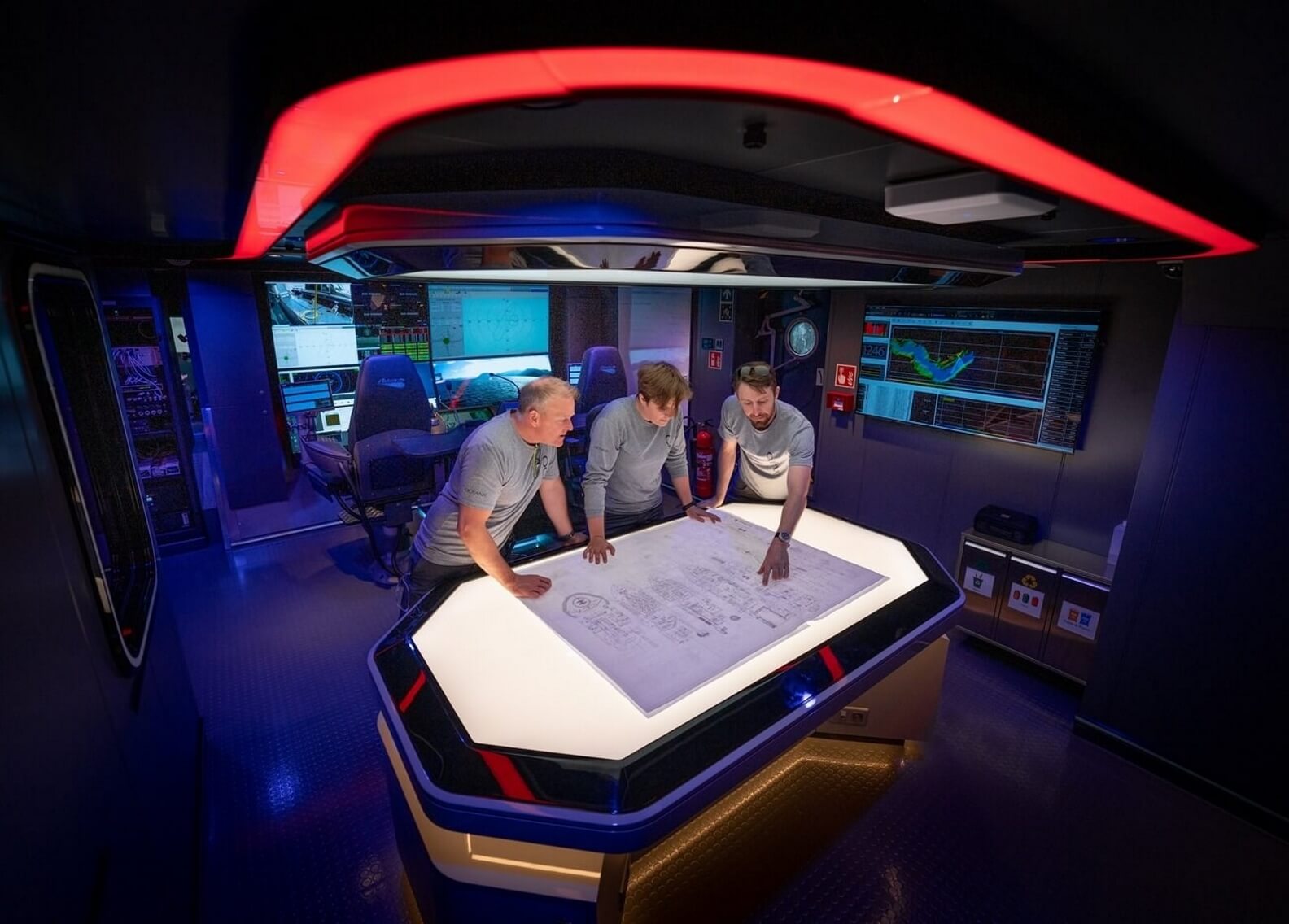 Mission control is like the central nervous system, where mission logistics meet scientific and media data collected from anywhere on the vessel and under the water. Here, the OceanX team reviews materials

OceanXplorer features a 40-ton A-frame from which are launched a range of submersibles, sonar arrays, two manned Triton submersibles and an ROV and AUV, each of which can dive to depths of up to 1,000 metres for up to eight hours. Exploring undersea locations in ways no human has before.

The vessel also hosts a helicopter with a climate-controlled hangar and a real-time content creation and distribution media centre. The underwater optical modem is just one item of equipment that contributes to that. Able to livestream never before seen footage and data from the submersibles direct to social media platforms and classrooms. 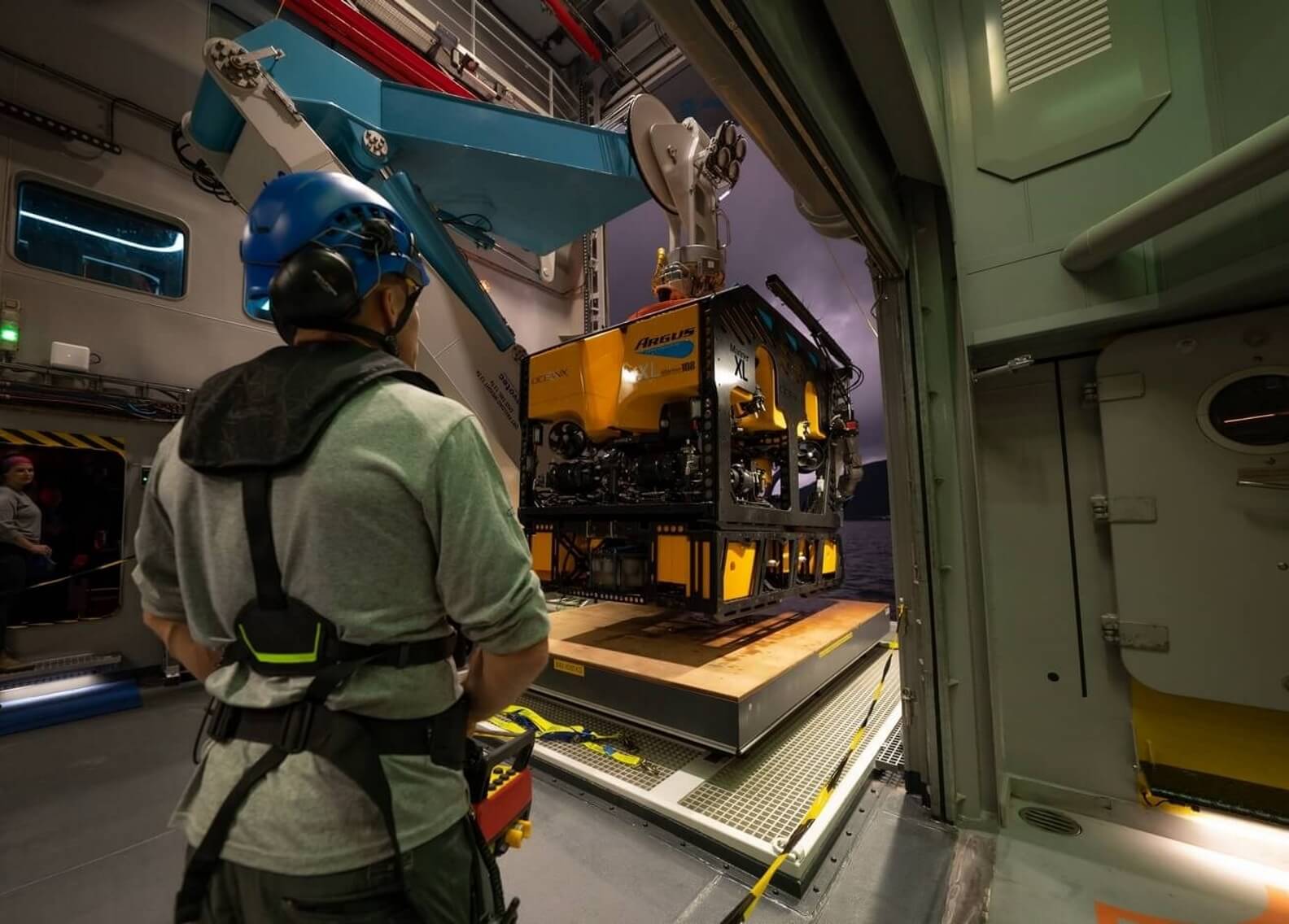 Going where no human has gone before

OceanXplorer will conduct surveys of a largely unexplored eco-system, creating high resolution 3D maps, including of the sea floor. This data will facilitate the launching of the ROV and/or submersibles that will collect biological, geographical and chemical data, as well as live samples that can be brought on board into the vessel’s cold tank area and wet lab for closer investigation.

With such materials and information, scientists from marine institutions around the world will be able to conduct groundbreaking research leading to exciting new discoveries. The capabilities at their disposal include state-of-the-art laboratories suited to DNA sequencing, thus establishing whether a sample represents the discovery of a new species. 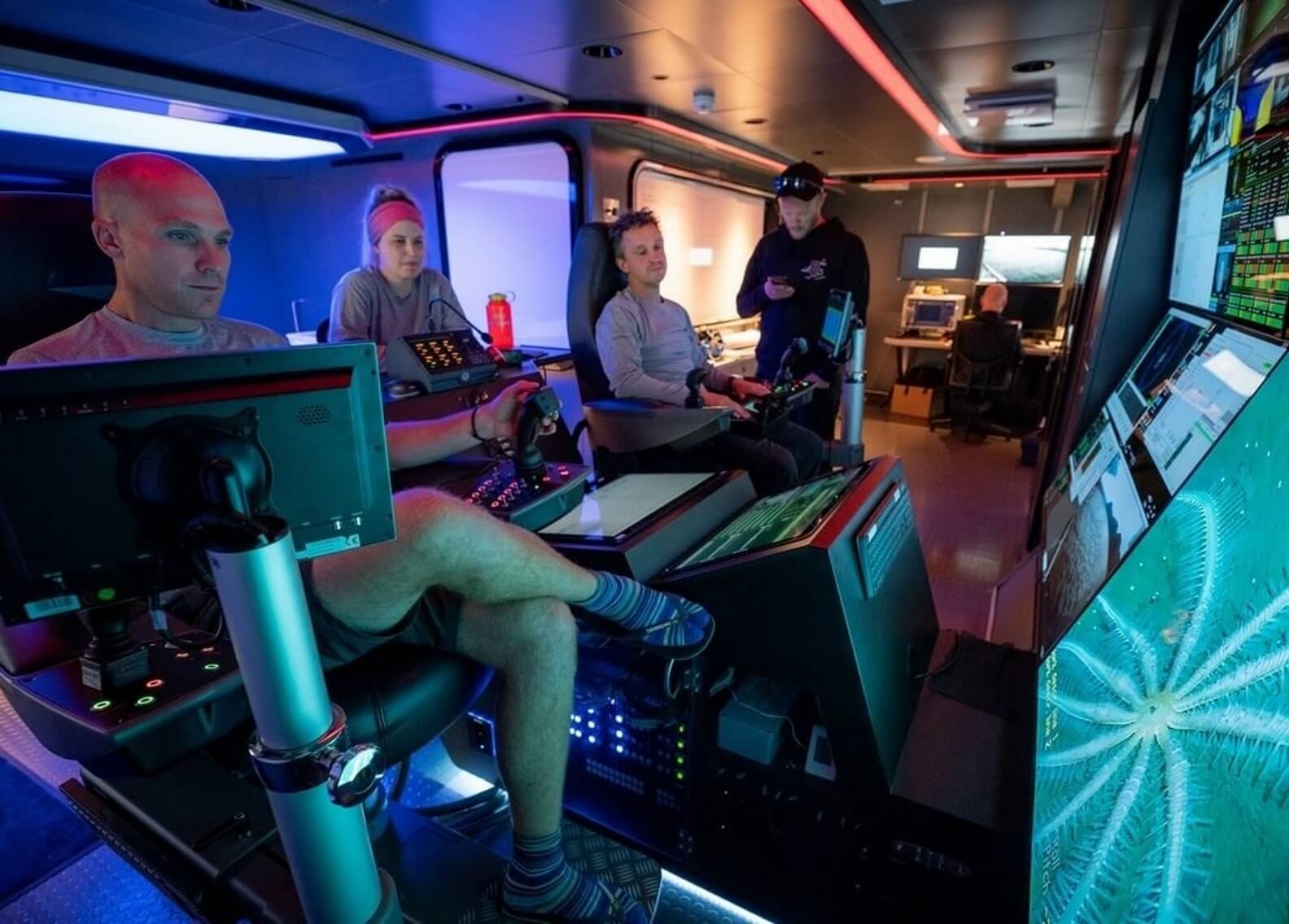 The OceanXplorer team conducting operations in mission control. Mission control is the nerve centre for all of the ship’s operations, from where teams navigate the submersibles and ROVs and collect and process all the mapping data for scientific analysis

Exploring the seas and oceans though, is just one part of OceanXplorer’s mission – she is also required to share her revolutionary findings with the world. To facilitate this, the vessel is outfitted with a media studio and filming capabilities developed in partnership with renowned filmmaker and ocean explorer James Cameron and the Avatar Alliance Foundation in consultation with production designer N. C. Page Buckner.

With this, the vessel’s outstanding research capability is paired with Hollywood quality production facilities that push the boundaries of nature cinematography. More than 3,000 custom light fixtures and numerous screens will help document the work of the scientists. These capabilities allow the vessel’s findings to be live-streamed to audiences worldwide, delivering scientific news at the exact moment of discovery.

In this way, OceanXplorer will bring the same global attention and enthusiasm for ocean exploration that space exploration has enjoyed. In turn, this will expand our knowledge of our planet’s valuable resources, increasing our understanding and informing our efforts towards conservation and sustainable management. 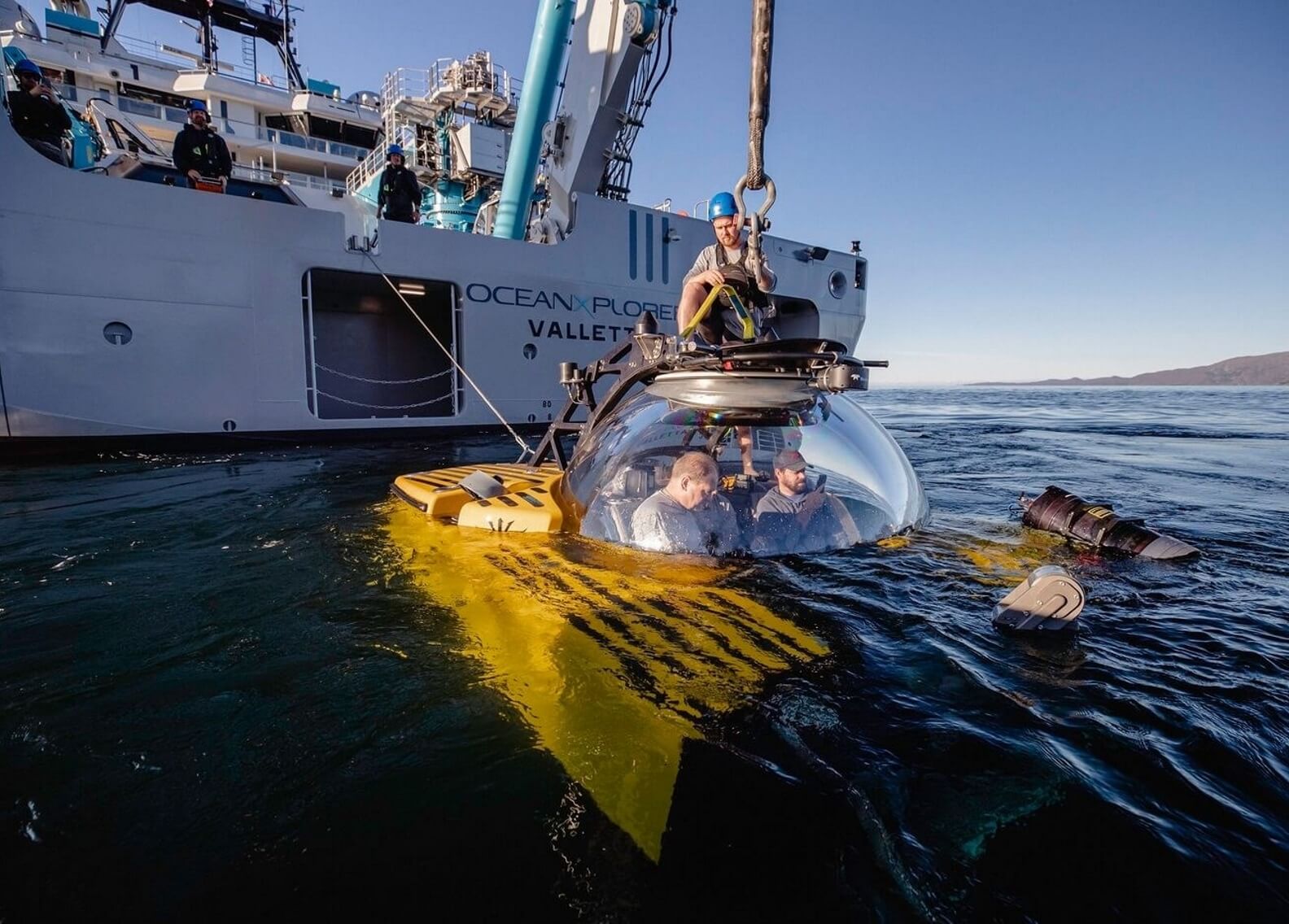 OceanXplorer’s Triton submersible is lowered into the water, as the ship’s crew and science team test its systems in preparation for future missions 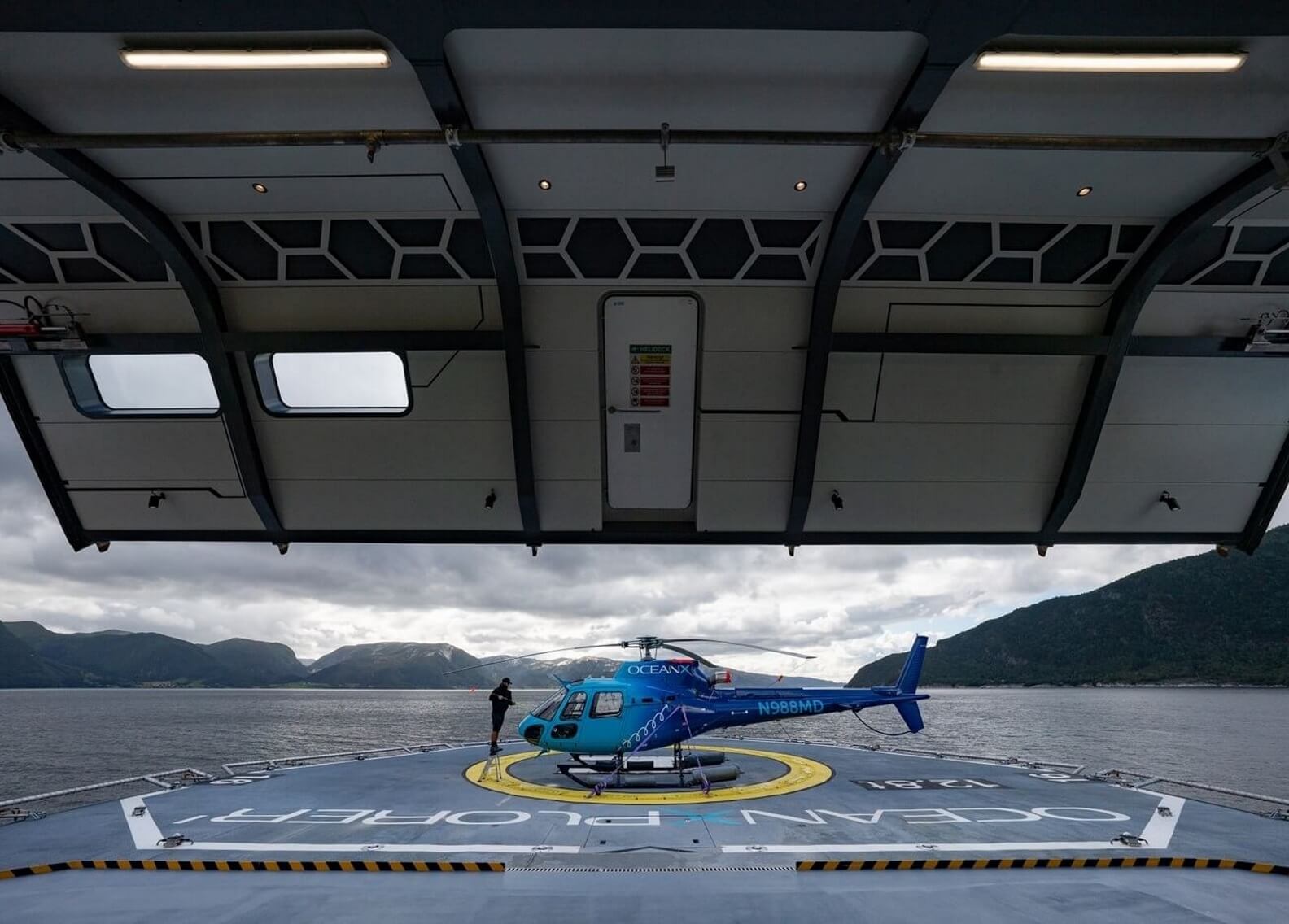 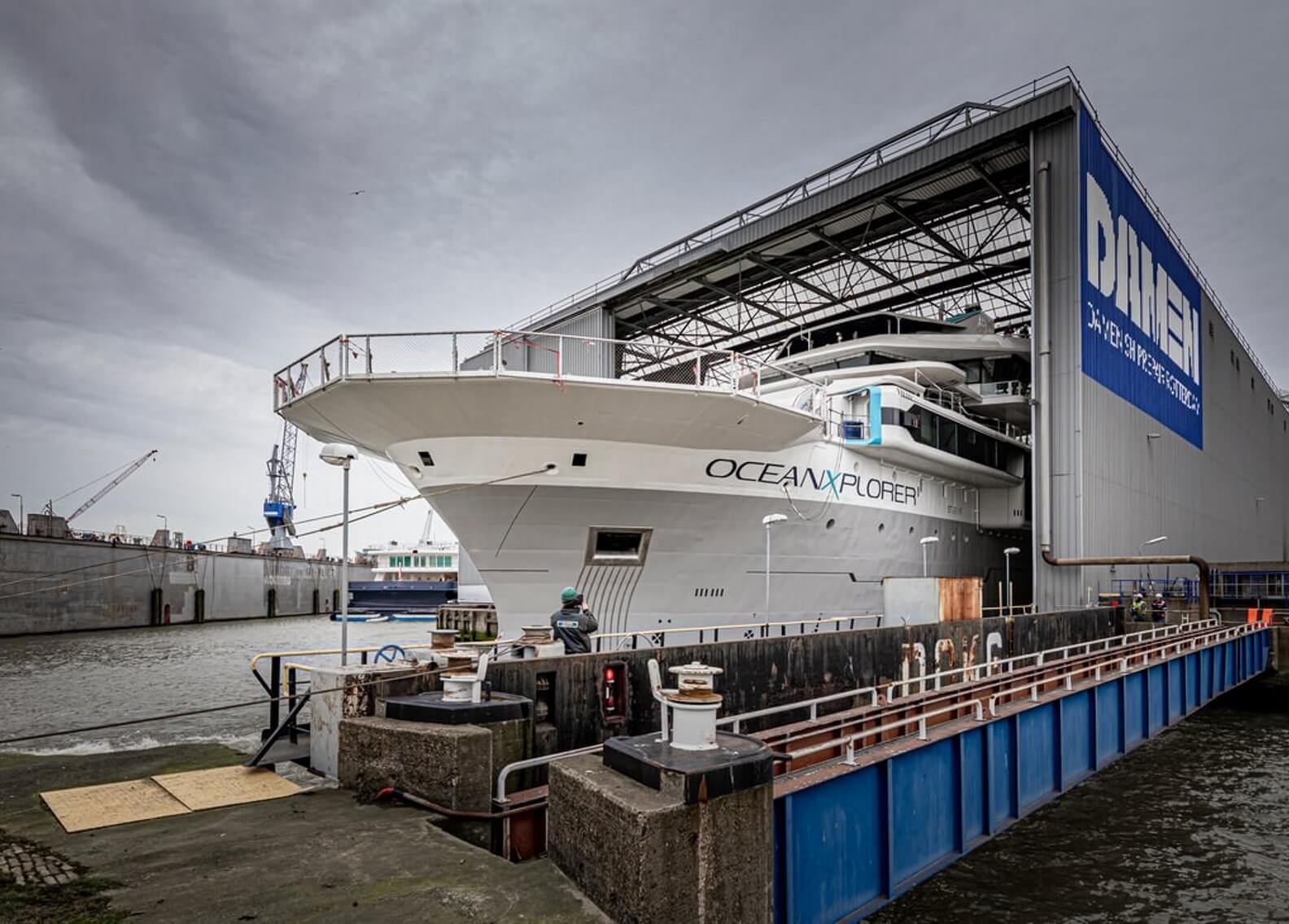 Damen’s scope of work on OceanXplorer was extensive. The work was extremely challenging and complex, calling upon the expertise of multiple disciplines from across the Damen Shipyards Group – including Newbuild, Shiprepair & Conversion and Yachting.

To convert an offshore survey ship into an advanced research and discovery vessel required a complete rebuild from the main deck upwards, adding new, larger accommodation to house the laboratories, workshops, submarine hangar and fully integrated heli-hangar. Damen’s responsibility included the complete integration of all ship’s systems including specialist hydrographic and laboratory systems and an innovative IT infrastructure to facilitate the combination of state-of-the-art research facilities with the on board Hollywood-standard cinematography and media studios.

Below main deck, the vessel required an in-depth docking scope, including removal and refurbishment of azimuth and bow thrusters, blasting and re-coating of tanks and upgrading of all crew accommodation.

Damen’s responsibility covered both internal and external spaces – everything from the luxury accommodation on decks three and four to the cutting-edge laboratory and research areas.

In this area of the project, Damen Yachting’s superyacht and explorer yacht experience paid off, with an entire team of SeaXplorer engineers drafted in.