A boost for Dutch defence and… the economy

The fact that the men and women of the Royal Netherlands Navy deserve only the best of the best when it comes to the selection of a successor to the Walrus-class submarines is beyond doubt. However, the award of this contract is also a unique opportunity to simultaneously achieve a number of important objectives.

The international security situation is deteriorating and countries are increasing their defence efforts. At the same time, the Netherlands is on the verge of purchasing new submarines. That order affects many more interests than just military ones. Complex aspects of European and international politics are important, as are industrial and other economic considerations.

“In the 21st century, the importance of the maritime domain is only increasing,” said Richard Keulen, director Naval Sales Support at Damen Naval. “That is great if, like the Netherlands, you are a seafaring nation with a rich history and a self-creating industry. The area that we as a nation are good at is growing in importance. It makes sense to make use of this, but also to defend this interest. The renewal of the submarine capacity is one of the most tangible aspects of this.”

The Netherlands has an open economy and a very clear international orientation. Full participation in supranational organisations; political, economic and military. This stems in part from a well-understood self-interest. Richard: “We are no longer a dominant power, we need alliances to secure certain positions. Anyone who wants to be included in those partnerships must have something to offer. You can only offer an exchange if you have something that is useful and distinctive to other parties. Expeditionary submarines with conventional propulsion are such a niche capability which, for example, NATO is in great need.”

Thus, the successors to the Walrus-class not only strengthen our own defence capabilities, but are also an essential contribution to the strength of NATO. In addition, they provide our national armed forces with a meaningful position based on reciprocity in international partnerships. For example in the field of information sharing.

In order to play a significant role in this international force field, it is necessary that others cannot ignore you. And not go through or over you. You cannot and will not do without some degree of national sovereignty. For Dutch naval construction, this sovereignty lies in the entire range of knowledge and skills required to control and manage complex naval projects, be they frigates or submarines. These positions are also clearly described in the Defence Industry Strategy, which the Dutch Government has embraced. The starting points of this strategy lead to the choice of submarines with the highest possible made in Holland content. This applies not only to the Damen part within the Saab-Kackums-Damen Shipyards Group consortium, but also to the entire national maritime cluster with which Damen is accustomed to working. This concerns large companies, but also Dutch SMEs that are involved as suppliers, ranging from Thales and KPN to Bolidt, RH Marine and De Regt Marine Cables.

“Regardless of which party supplies the successor to the Walrus-class submarines, it is crucial for our Dutch high-quality industry to be affiliated with projects such as this one, explains Bob van der Horst, commercial director of VDL Defense Technologies. “The attractive thing about this assignment for us is that we are able to apply our technological competences at a maritime level.” Bob represents the 105 operating companies of the family business VDL Groep in military and security-related projects. “The French and German providers have been successfully building submarines with their own supply chain for years. Undoubtedly, we can also provide added value in specific areas. However, with the combination of Saab-Damen we are involved at a technological competence level. As a result, we have expanded our existing knowledge and, together with all the Dutch companies involved, we can shape our maritime industrial sovereignty.”

Despite the disappearance of the builder of the Walrus-class, RDM, the Netherlands still has extensive experience in the field of submarine construction. As Richard Keulen says, "It doesn’t cover all aspects, and that is why we asked Saab Kockums to work with us, but the Dutch industry succeeded very well in carrying out the large-scale upgrade of the current four submarines (of Dutch design)." 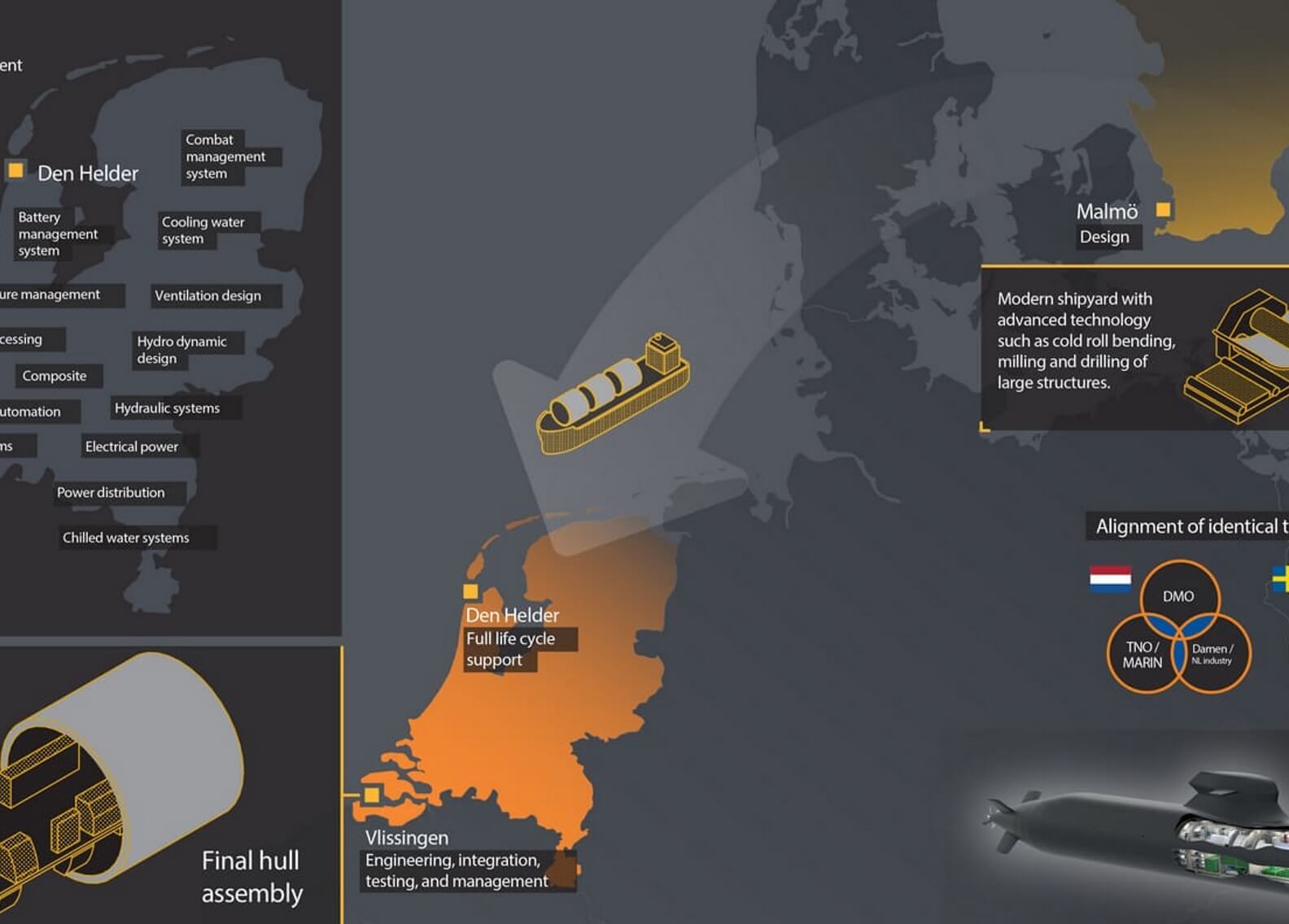 Partly to address this deficit, the Dutch Underwater Knowledge Cluster (DUKC) was established. “With this we want to further develop the knowledge that is available in the Netherlands in the field of underwater technology,” explains chairman Harm Kappen, director Global Sales Defense, Safety & Security at RH Marine. “It is not intended as a consultation or lobby club, but is a network of companies that can really add something in the field of underwater technology based on their own expertise. Damen is therefore the only shipbuilder in our midst.”

According to him, this does not mean that there is no discussion and cooperation with the other bidders for the contract. “No, we cannot afford that. Should the choice fall on the French or German proposals, we naturally also want to be in a position to be able to make our contribution. However, we know Damen well. We already work with them a lot within the Dutch maritime cluster. We know what to expect from each other. Ultimately, our goal as DUKC is to establish a long-term submarine cluster in the Netherlands. The tender for this order is a prelude to this.”

Bob agrees. “The purpose of our knowledge building is to contribute technology and manufacturing competences to the project and thus to invest for the long term. We also have that horizon as a family business, just like Damen. As far as I am concerned, this maritime industrial sovereignty also includes exports in the long term.”

This view is shared by Richard Keulen. “Keeping the main part of development and construction of the next generation of submarines in your own country also enables you to update and strengthen knowledge according to the ‘launching customer’ principle. Then you can also start looking at exports on the basis of this. That means an extra investment in Dutch industry. Developing and integrating complex military systems is the Formula 1 of shipbuilding. We are already good at this. In addition, our national naval construction sector has proved that it can supply on time and within budget. As private companies in this sector, we also have to ensure our survival. This is in contrast to some of our state-sponsored or partly state-owned competitors.”

Former navy man Richard Keulen is already looking forward to the assignment. “I think it will be a great honour if the Dutch maritime cluster is chosen to create a modern submarine, in which the men and women of the Royal Netherlands Navy can operate safely and effectively until at least 2060.

“The combination of Damen-Saab as main contractors and system integrators provides the best guarantee of on-time delivery, within budget of a product that the Royal Netherlands Navy is waiting for. It will also ensure that our national expertise in this highly advanced sector is guaranteed for many years to come. And the fact that it will also be the most ‘Orange’ boat is a wise investment in these corona pandemic times and long afterwards.” Or as Harm Kappen sums it up: “It’s about the best boat at the best price and with the greatest possible Dutch involvement.” 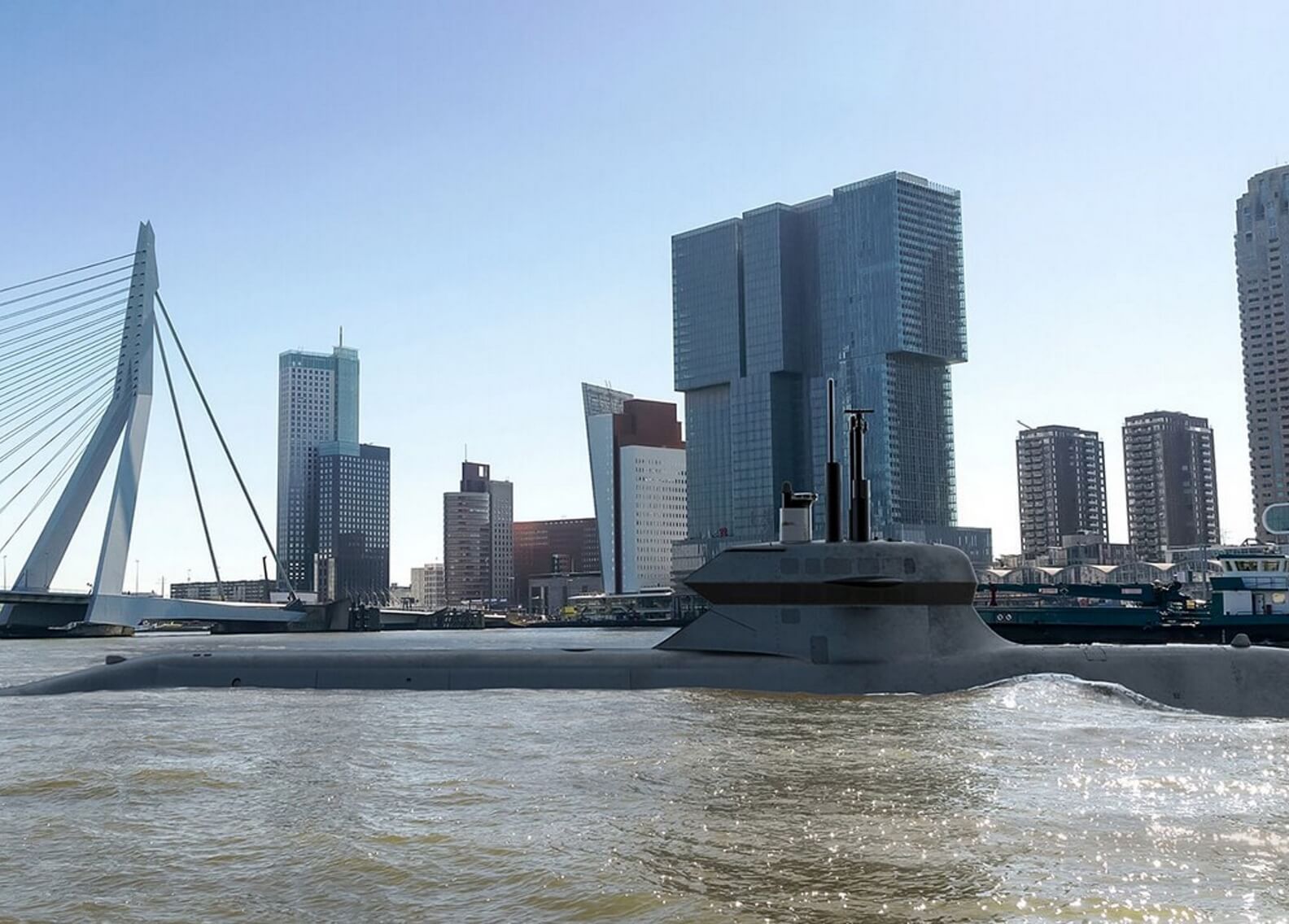